The recent shootings: did they happen as advertised by the media … or not? I am always suspicious—and I will talk more about that—yet either way, all of us are talking about the shootings. And that is where we can get defeated. But there is a way to victory.

These days, it appears the news outlets do that job. Last week (when I originally wrote this article), nineteen Yezidi women were burned to death for refusing sex to extremists in the Middle East. Twenty were killed in Syria by a suicide bomber. But we were not talking much about that. We were talking about Orlando. Or Dallas. Or France, or Munich, et al. Why? Because that is what major media outlets are jointly blasting 24/7. Before that, we binged on San Bernadino, Paris, Charleston. The list seems to be growing at curious speed. We also observe the anniversaries of these strange mass murders.

Should we question the media stories, even something as large as these mass shootings? Absolutely. Consider this video by former Gore and Clinton campaign consultant Naomi Wolf (now a journalist published by outlets such as The Guardian, The Nation, National Review, and Huffington Post). She says, “We’ve entered an era where it is not crazy to assess news events to see if they are real or not real … in fact, it’s kind of crazy not to.” She admits this is a “very painful thing to talk about.”

But, once again, if we are talking about it, we are on someone else’s agenda. Is there anything powerful enough to overcome or even compete with this overwhelming phenomenon? In fact, there is. The ancient and historic (and eternal) church calendar.

I’m thinking a lot right now about the Feast of Transfiguration, coming up in a few days. This is one of the great revealings of the Holy Trinity. A few weeks ago, I focused a good bit on the Ascension of Jesus Christ. It freaked out the powers, authorities, and angels in heaven, because never before had a human ever been near the heavenly realms. The night before the feast, our outpost of the historic Orthodox church in Chattanooga, Tennessee, recited ancient verses describing and extolling this first ever ascension. The next morning our church held a Divine Liturgy celebrating the Ascension.

Next week we will approach the Dormition of the Mother of God. The Calendar causes us to regularly meditate on positive things. We have a big drama every week, and we have daily passages and people to meditate on as well.

The best defense is a good offense, and Jesus has a great offense. 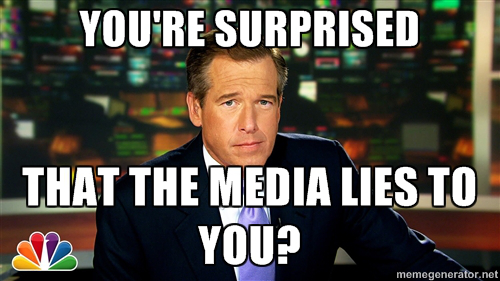 Don’t get me wrong: I believe in exposing evil, conspiracies, and fighting violence and mourning the dead. But that’s defense. This media agenda by our elites is very controlled—I certainly have little control over it—and many if not most of those who do control it hate Jesus Christ. Since He happens to be the center of all things, the point of the entire cosmos and all reality, I would rather submit myself to an agenda controlled by those who love Jesus Christ. And so I do.

Writer William Dalrymple, in From the Holy Mountain, visited a monastery in Greece in search of an ancient manuscript. He was crestfallen to learn the abbot was not there, and asked the monk when he would return. “He should be back by the Feast of Transfiguration,” the monk replied. They know how to set the agenda.

This guy is probably not influenced much by Rupert Murdoch.

Yes, I am a corruption theorist. I think the corruption has gotten so bad that many within our own government lie to the people, and use the major media to do so. (It’s been going on for decades, see Operation Mockingbird).   Therefore, every major media “event,” especially those of a high sensational nature, need to be critically examined for their authenticity and their motives: how might this event advance a sinister agenda?

These articles here and here on Jay Dyer’s site Jaysanalysis.com provide some bigger picture views to help make sense of our “perverse generation,” as Jesus might call it.

Yes, it is very sad that it has come to this in our country. But Jesus Christ provides two ways to overcome this enemy.

1. He provides the answer to death, evil, and hate. He is resurrection, light, power, truth, and love.

2. He provides the first, the best, and the correct agenda. It’s the church calendar.

After this week, let’s spend some time talking about the Dormition and then nativity of John the Forerunner. Regarding the upcoming Transfiguration, I’m still learning whether Jesus shone like the Sun through his human or divine nature, or both—it affects how you view your own ability to become like God. We can meditate on that rather than serial killers.