Encapsulating his view of the essence of politics, Vladimir Lenin famously asked “who, whom”, that is to say, what matters in power relationships is who does what to whom. Under the elaborate trappings of abstract, supposedly universal morals, this brutal and obscene maxim has long been the West’s primary operating principle in international affairs.

This week’s Washington-backed Saudi attack on the country of Yemen is a reminder of this cynical practice. Saudi warplanes, supplied with US intelligence data, began bombing Sanaa, the Yemeni capital, in an effort to dislodge the Shiite Houthi militias from their positions. A few weeks earlier these tribal mountain fighters had ousted Abd-Rabbu Mansour Hadi, Yemen’s puppet president, and seized control not only of the capital, but also of large swathes of the country.

The Saudis and the State Department have justified the intervention on the grounds that the Houthi are supposedly Iranian stooges, and that the removal of the US-installed president will leave Yemen open to radical Islamic terrorists linked to al-Qaeda. Such charges, which are dubious at best, have no basis in reality, as Justin Raimondo of Antiwar.com points out:

In spite of US-based news accounts reporting the current conflict to be between the Saudis and “Iran-backed rebels,” the evidence for the Tehran-Houthi connection is tenuous to nonexistent. There is no evidence of Iranian involvement beyond political (i.e. rhetorical) support. Indeed, as Christopher Boucek and Marina Ottoway report in their book, Yemen on the Brink, “some Yemeni officials have confided that such assertions are unfounded.” Doctrinal differences between the Zaydi sect of Shi’ism and the Iranians over important theological issues within Islam preclude Tehran from providing any substantial support for the Houthi insurgency beyond mere words. Neoconservative pundits who point to the Houthis’ success with alarm mirror the propaganda of al Qaeda, which denounces the Zaydi “takfiris” (apostates) in similarly hysterical terms. The Houthis, for their part, have never attacked Americans or American interests in Yemen, as acknowledged in a series of classified cables sent by the no-longer-present US embassy. 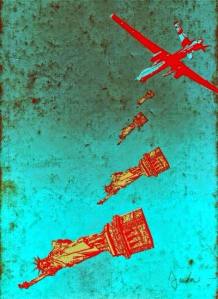 Can you feel the freedom yet??

So what really stands behind these prefabricated, substance-less media talking points? Why are some 150,000 Saudi troops amassed and being positioned for a potential ground invasion in Yemen? And equally important, why is the Obama Administration facilitating this unprovoked aggression against Yemen by the theocratic, tyrannical Saudis?

In this same vein, the Russian philosopher and Eurasianist theorist Aleksandr Dugin, who holds no political power, was sanctioned by the American government for his calls for more direct Russian aid to pro-Russian separatists in eastern Ukraine. But such harsh policies only exist for Russian scholars. In the US, warmongering neoconservative academics are given access to the Washington Post to promote war against Iran, and a psychotic retired American general can go on FOX News and call for the US government to “start killing Russians” in order for Washington to have its way in the Ukraine.

And now let us return to Lenin’s dictum. It is considered a matter of legitimate public discourse for establishment figures to advocate aggressive wars against other countries via the corporate media, but a Russian speaking on Russian interests in Ukraine is ruthlessly punished by Washington.

In the eyes of Western ruling elites, it’s perfectly valid for a violent mob, coordinated by CIA, the State Department, and allied NGOs and including a pivotal force of neo-Nazis, to overthrow a democratically-elected president, and it is entirely unacceptable to the Euro-Atlantic elites that Russia would oppose this move and seek to protect its historical interests and influence in its near abroad. On the other hand, it’s impermissible for the historically oppressed Houthi Shi’ites in Yemen to oust a corrupt ruler, and it’s praiseworthy for “our friends the Saudis” to militarily intervene in Sanaa and restore their marionette to power. 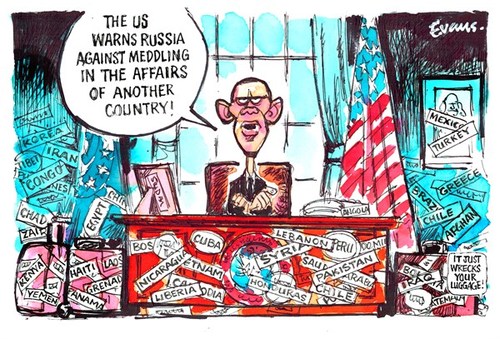 All the effusions of rhetoric on human rights and democracy employed by the Atlanticist ruling class form a thin film of deception concealing endless geopolitical gambits and the raw will to global control. The budding war in Yemen is an attempt by the Wall Street-Riyadh axis to maintain hegemony. As the geopolitical analyst F. William Engdahl observed some years ago:

In addition to its geopolitical position as a major global oil transit chokepoint, Yemen is reported to hold some of the world’s greatest untapped oil reserves. Yemen’s Masila Basin and Shabwa Basin are reported by international oil companies to contain “world class discoveries.” France’s Total and several smaller international oil companies are engaged in developing Yemen’s oil production. Some fifteen years ago I was told in a private meeting with a well-informed Washington insider that Yemen contained “enough undeveloped oil to fill the oil demand of the entire world for the next fifty years.” Perhaps there is more to Washington’s recent Yemen concern than a rag-tag al Qaeda whose very existence as a global terror organization has been doubted by seasoned Islamic experts.

A Houthi-dominated Yemen would seek to break out of the US-Saudi orbit, and move closer to Russia and Iran, thus depriving America of easy access to both a geopolitical chokepoint and a potentially rich supply of energy resources. That is a reality intolerable to the Atlanticists and their Wahhabi henchmen. As the oligarch-funded neocon senator Tom Cotton recently pontificated, the US must establish and maintain “global military dominance.” Whether through the bogus threat of “Al-Qaeda in the Arabian Peninsula” or fears of Iranian hegemony via the Houthi Shi’ites, the American people must at some point sense the fraudulent nature of the unjust wars perpetrated in their name. Until then, the think-tank warlords of liberal imperialism, heirs to the ruthless utopian enterprise of Lenin and his Bolsheviks, will seek to enforce their full-spectrum dominance over Yemen, and indeed over all of the Middle East and Eurasia.