With the closing of another year marked by media hysteria, the narrative that the crazed hermit North Korean regime orchestrated the hacking of the Japanese-owned Hollywood company Sony, thereby assaulting our precious freedom to crank out cultural subversion, has quickly begun to fall apart. From the beginning the story never held neither consistency nor any forensic evidence. Yet the notion that ruthless Korean dictator Kim Jong Un wants to keep them from the movies, the modern substitute for the West’s emptying churches, has sent cable news consumers into a panic.

Elusive North Korean hackers have joined ISIS, Ebola, and a resurgent Russia on the ever- lengthening list of threats that government and media tell us we must fear. As it stands now, with the script quickly breaking down, the media and government (really two tentacles of the same power structure) are bound to quickly divert attention elsewhere; a new national security villain will be constructed and dangled in front of the attention-deficit public.

The trap is set, comrades!

Meanwhile in France, several young radical Muslims have been attacking their host society, attempting to murder French police officers and Christmas shoppers. As has become standard fare in our era of political correctness, the French government quickly sought to dismiss the cosplay jihadists as having nothing to do with terrorism, casting them instead as a random assortment of mentally ill individuals senselessly lashing out. Similar ISIS-inspired escapades by marginal, ressentiment-driven characters have transpired in recent months, not only in France, but also in Canada, the United States, and Australia. Government authorities in these nations were equally quick to dismiss such attacks by self-styled holy warriors as aberrations that should not be seen as part of some wider pattern, lest the West’s entire secular multicultural project come under deeper scrutiny.

It is in this environment that the 20th century German philosopher Josef Pieper observed that while modern man is “looking out for the powers of corruption in a mistaken direction,” the lords of the technocracy “establish their rule before his eyes.” Modern man is diverted down a multitude of false paths toward dead ends, but he remains all too often oblivious to what is happening right under his very nose. His ignorance, often willful, lends strength to those who would seek even more power to control and manipulate him.

So while the public is held in a state of anxiety over North Korea and other manufactured phantoms, media reports have surfaced (and not for the first time) revealing that US police departments are utilizing their position in the new security architecture to scan and monitor social media and other online activities. In his endless benevolence, Big Brother is peering over your shoulder in order to develop a color-coded “threat rating.” Hence, as the 20th century science fiction writer Philip K. Dick foresaw, the age of “pre-crime” is upon us. As is normative in our times, the blatant power grabs of the surveillance state go mostly unnoticed and unprotested by the masses.

There is a serious disconnect between what the elite tell us we must fear and the “threats” they themselves utilize. While do-it-yourself jihadists (often themselves manipulated by domestic intelligence agencies) and other manifestations of underclass violence are brushed aside, those who dare openly express their dissatisfaction with the policies of our beloved rulers risk finding themselves listed as threats by the surveillance state. Leviathan grows ever larger and more pervasive in the name of security, only to use its power not against actual threats, but those it claims to protect. The Swiss philosopher Éric Werner provides some illumination here:

He further notes that the ruling politicians and bureaucrats’ real fear “is not insecurity, but rather potential retaliations against insecurity.” 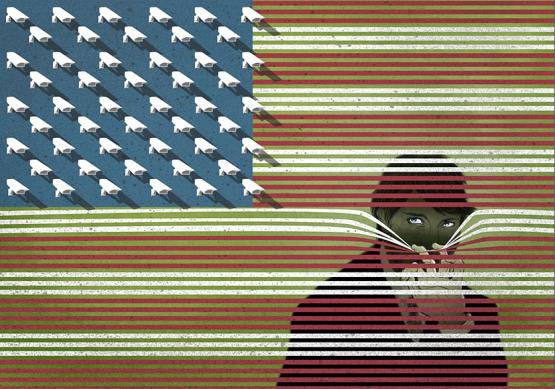 No one’s watching; just enjoy the wind of freedom blowin’ through your hair.

We must ask what that oft-used buzzword “freedom” actually means in the modern West. For many, the ability to stream an inverted universe of pornography or order off of Pizza Hut’s “subconscious menu” from their iPads is enough assurance that they are still free, but the ever-expanding Leviathan state and the spread of vapid consumerism should give us all more than a moment’s pause. If freedom is reducible to a dazzling array of consumer options and self-gratification, why is that worth dying for? We must strive toward being higher than the perpetually consuming, soulless homo economicus.

In order to resist and confront the forces arrayed against him and to achieve a higher freedom, man must begin with repentance and spiritual reformation. His soul must be cleansed of sloth and apathy, as well as the other enslaving vices that leave him open to fear, manipulation, and despair; or as Ernst Jünger put it, one “must be free in order to become free.” The German adventurer further said that for the spiritually free man, “this world filled with oppression and oppressive agents,” will only “serve to make his freedom visible in all its splendor.”

The great Russian thinker Nicolas Berdyaev, who himself openly defied the murderous Bolsheviks who overran his homeland, taught that the “victory over slavery is a spiritual act,” and that “social and spiritual liberation ought to go hand in hand.” Repentance and spiritual resistance are the first, and most important, steps in confronting the powers of our age.