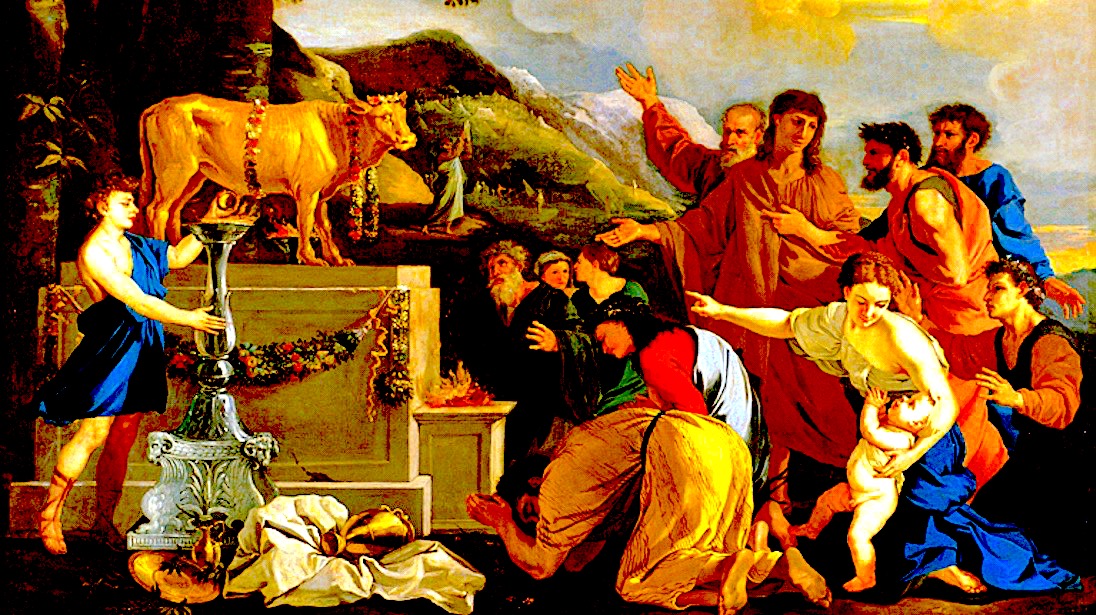 American churchianity, and the West in general, are a giant atheism factory.  The clowns and carnival barkers that make up the “religious establishment” are some of the worst human beings imaginable.  Don’t misunderstand me – this isn’t the diatribe of some rebellious teen fresh off of my first copy of a Nietzsche text, these are the experiences of someone who has spent decades in these various sects and congregations.   The rot of these institutions has many sources, the more theological of which, I outlined in my video on the Decline of the West.

As I’ve mentioned, the mass promotion of atheism lacks the power of any real hold on man’s heart because man is a god-worshipping being.   For the classical American Protestant, for example, the Constitution becomes the new inspired text, the “founding fathers” become the new church fathers, America becomes the new “city on a hill” slash mystical body of Christ, and the “invisible hand” of the free market is the new divine providence.   For the modern “rational atheist,” Darwin becomes a new prophet with the scientific method transfigured into mythic grand narrative and its attendant priesthood of inaccessible lab coat hierarchs.  Under the guise of reason and science, scientism actually becomes a halfway house to the most bizarre, state-funded fringe cult ideologies and false mysticism expressed UFO cults, new age movements, transhumanism, paganism, Odinism, Crowleyanism, U.N.-based ecumenism and countless other man-made concoctions.

The importance of the big theological issues cannot be overlooked precisely because they are what give rise to the philosophical changes, which then lead to the societal alterations.   I have discussed many times how the empirical aspects of Thomism’s analogia entis laid the groundwork for a ‘god’ whose “created effects” alone could be ascertained in “knowing Him,” while 500 years later, this Unknown God’s creaturely shells logically led to the shedding of the hidden, and the deification of the natural world itself.  Why posit the empirical claim that this deity “exists” when he is perpetually concealed behind these supposed causal chains?  Why not just say what is, is the causal chain itself?   Isn’t this more faithful to the naive empirical enterprise?  It’s only a hop, skip and a jump from there to the Enlightenment experiment known as “America.”

While these debates were had between Eastern and Western theology hundreds of years ago, our day is one dominated by this same root notion, of bare, neutral, “empirical facts.”  As Bertrand Russell noted, our era is dominated by the Scientific Outlook.  For most, these developments constitute “progress,” one of the many unquestioned and empty slogans of the revolutionary periods, followed by “liberty” and “equality,” the new conceptual gods beyond question or analysis.  We think of these experiences as new, and unique to the modern world because they are attended with iPhones and smart cars, but these experiences are ancient.  The usage of espionage, sexual liberation and “scientific,” regal subterfuge are key aspects of the historical books of the Bible – of which modern churchianity is largely oblivious.

As a result, the numerous apostate churches and sects, especially in America, become monstrous hybrids of something resembling the skeletal remains of ancient Christianity combined with the utterly incompatible and undefined new gods of our age.   It’s comparable to the age of Israel under Jeroboam and Rehoboam, where the kingdom was divided due to Jeroboam’s creation of a new, state controlled syncretistic cult where both Jehovah and the golden calves (and eventually Baal) were all placed on equal footing under the new laws of religious liberty that replaced God’s Law.  As the entire history of the Law and prophets show, this “progressive” state religion of Jeroboam led to the sexual revolution of the introduction of male cult prostitutes and the eventual collapse of the nation state.   It’s almost like Jeroboam was running and controlling Freemasonry – the origins of modern “religious liberty.”

Most would balk at the wisdom found here, yet how perceptive and wise were the prophets in foreseeing this – that Jeroboam’s revolution itself was a state-funded facade.   In history and geopolitical analysis, we often speak of courtly intrigues and sabotage, espionage and a hundred other facets of the period of modern revolutions, but rarely do we consider the biblical approach to the norm – that the state and its state cultus – were often conspiring.  Recently rereading 1-2 Samuel and 1-2 Kings, I was struck at how perennial the problems of man seem to be.  Jeroboam, the apostate ruler who would become the first king of the schismatic northern tribes of Israel, was an exceedingly keen state operator.  Jeroboam realized the location of the approved temple worship in Jerusalem in Judah would be a problem for the consolidation of power, which led to his creation of new temple sites at Bethel and Dan (in his domain).  The institution of Jeroboam’s revolutionary esoteric cult is instructive:

25 Then Jeroboam built Shechem in the mountains of Ephraim, and dwelt there. Also he went out from there and built Penuel. 26 And Jeroboam said in his heart, “Now the kingdom may return to the house of David: 27 If these people go up to offer sacrifices in the house of the Lord at Jerusalem, then the heart of this people will turn back to their lord, Rehoboam king of Judah, and they will kill me and go back to Rehoboam king of Judah.”

28 Therefore the king asked advice, made two calves of gold, and said to the people, “It is too much for you to go up to Jerusalem. Here are your gods, O Israel, which brought you up from the land of Egypt!” 29 And he set up one in Bethel, and the other he put in Dan. 30 Now this thing became a sin, for the people went to worship before the one as far as Dan. 31 He made shrines on the high places, and made priests from every class of people, who were not of the sons of Levi.

The orthodox form of worship was at Jerusalem, the City of David, and it was David’s descendants who were to be the royal dynasty.  In Jeroboam’s revolution, we can discern numerous parallels to the problems of our day, and one of the more subtle is the fact that previous to this (verses 12-15) Jeroboam’s revolution began with terror.   As with many revolutionary movements, terrorism and psychological warfare become the means of social conditioning to prepare the masses for the acceptance of a new leadership, which promises greater freedom, while simultaneously threatening the most tyrannical measures of dominance.  Jeroboam threatens Israel with extreme slave labor while also promising them a new state religious cult based around ritual cultic sex magick and ceremonial prostitution (as we learn later in the period under Ahab and Jezebel).  This new state religion also included the appointing of state agents, spies and operatives as “priests” of the new cult, as we see in verses 31-32 (a very similar scheme had also occurred in the period of the Judges in chapters 17-18).

Kingdom era and the divided period.

Having been given the freedom from slavery the Israelites bore under the long Egyptian sojourn, a few generations later they were craving the religious symbols of Egypt, the golden calves Aaron had made to give the Israelites a god they could see and control – an idol (Ex. 32).  With rapacious cunning, Jeroboam had centralized his power base and utilized the technique of doublethink by giving Israel a new national symbol – an idolatrous image of their freedom and liberation from Egypt – that now stood for sexual liberation.  At the same time as giving Israel a new sex cult for control through base desires, Jeroboam terrorized Israel by promising arduous slave labor.  The irony here is Jeroboam has become a new Pharaoh, golden calves and all!

In our day, the new state cult takes many forms, and is not merely an orgy cult in D.C. (though that obviously exists).  For the Americanized evangelical dupe reading these passages, the source of the problem would be located in the state itself – the government.  This Americanist libertarian presupposition is obviously utterly foreign to biblical religion which, throughout the entire books of the kings (and a thousand other places) condemns Jeroboam’s heresy of religious liberty.   It is the presupposition of placing Jehovah on the same level as Baal and Ashtoreth from which one may freely choose like a buffet that is the root of the apostasy of Jeroboam.   Indeed, the entire ethos of America is built on the false presupposition that religious liberty means the freedom to erect a tax free religious cult for Jesus, Satan or even a hybrid of both like Charles Manson proffered.   The Ten Commandments, which I hope some believers might be aware of, actually forbids absolute religious liberty – you shall have no other gods.

The biblical position, and what would eventually become the norm for the first millennium of Christianity, is the Christianization of the Empire.   As prophesied in Daniel and Isaiah, the nations were to be converted by the Messiah and integrated into his kingdom, the Orthodox Church.  The state, as an institution, is put in its proper place as subordinate to the judgment of the Church, and even derives its authority from her (the classical doctrine of the anointing of kings and emperors).   These notions are so utterly foreign to America that is it truly miraculous when anyone comes to understand these fundamentals of classical Orthodox theology.   One can only read the decrees and letters of the Seventh Ecumenical Council, for example, and its divine praise for the “God-ordained Orthodox Emperor” with amazement, given how foreign this idea is to even American so-called “Orthodox” (who often differ from their Protestant and Catholic co-religionists only in costume).

Anointing of an Orthodox Ruler.

The problem is not an external institution, as both the state apparatus and the religious cultus under the various phases of Israel’s history often apostatized.  Even before the era of the kings, apostasy was rampant in the period of the Judges and the lack of a king is cite as at least part of the source of Israel’s religious relativism: “There was no king in those days, and everyone did what was right in their own eyes” (Judges 17:6, 21:25).  It should also be added the indictment of Israel’s call for a king is not based on the inherent defect of monarchy itself, but because they cried for a king “like the other nations” (1 Sam. 8:5).  In fact, the promise of a royal dynasty from which the Messiah would come was already promised in Genesis 49:10.

The root of the problem for Israel was the collapse of the true religion, the church, and as a result the schismatic state of Jeroboam was able to concoct an intelligence operation based around his own Pharaonic control.  This is also why authentic Christianity, Orthodox Christianity, cannot rely on a state savior, be it Russia or anywhere else.  While it is true the state has a duty to protect and promote the true religion, it cannot be relied on as the savior.  The groundwork of transforming the hearts of the people is the first and foremost duty, and when the society becomes Orthodox, the state can be chrismated and held accountable for promoting Orthodoxy and banishing heresy and heretics.   For Orthodoxy to grow, the state agents and spies (who we know in many cases are operatives of NATO and western intelligence), their ecumenical internal destruction project must be rejected as modern forms of Jeroboaism.  Until this occurs (and it is beginning to), the churchianity of the West will remain an atheism factory.