Fyodor Dostoevsky was more than just a writer; he was a penetrating philosopher and metaphysician who passed through the abysses of the spirit in search of divine perfection. In his work Dostoevsky: The Metaphysics of Crime, Russian scholar Vladislav Bachinin examines Dostoevsky’s kinship with Plato, the pagan philosopher honored in Orthodox civilization and thought for his quest after the Divine Logos, Who would be revealed incarnate to the world – and more beloved by Dostoevsky than life itself – as the God-Man Christ. Translated by Mark Hackard.

Longtime European tradition has accustomed theoretical thought in the humanities to primarily use the causal-consequential method of knowledge, yet its limited possibilities have far from always troubled scholars. They have tried not to notice the circumstance that a causal connection is capable of stretching into an endless chain, and that it has therefore always been necessary to forcefully chop it off at an arbitrarily chosen spot. Otherwise, there would exist a danger of getting lost in the retrospective reaches of causal preliminary study and losing any tangible connection with the subject of one’s research.

Oswald Spengler, reflecting in The Decline of the West on the imperfection of the causal-consequential approach, asserted that in comprehension of the essence of cultural forms and phenomena, the method of analogy has been quite productive. Diverse comparisons allow for objects of contemplation placed alongside one another to mutually illuminate one another. Spengler simultaneously lamented the fact that very few master the art of refined and profound analogy, and that the technique of comparison in the humanities has been practically undeveloped.

From then not a little time has passed. However, despite the appearance of a seemingly independent genre of comparative studies, the cultural analogy continues to remain more a matter of art than science. The productivity and heuristic utility of comparisons undertaken in philological, cultural-historical, philosophical and other disciplines depend to an enormous degree on the talent and insight of researchers and in much less measure upon the use of proven methodological instruments, since the latter have not yet been formed to their proper role.

Meanwhile, elemental comparisons, and the reservoirs of knowledge which are sensed by many scholars, did not leave Dostoevsky unaffected. And this is natural, since the grander in scale the artist’s figure, the greater the number of living ties that unite him with the past, present, and future.

Dostoevsky has been compared alongside Shakespeare and Cervantes, Kant and Hegel, de Sade and Nietzsche, and many others. And there is every basis to assume that this scholarly tendency will continue, for his figure as an artist and thinker is already immense.

What ties Dostoevsky to Plato? The circumstance that the writer was familiar with the ideas of the Ancient Greek philosopher[i] is still not a sufficient foundation to set them together. Besides that, the temporal interval between them of two thousand-some years, over the length of which a myriad of cultural-historical ties have been broken, forces us to approach quite guardedly the formulated question and the proclaimed attempt to carry out such an analogy along with it.

Our reticence, however, will doubtless begin to dissipate if we remember that the Platonic tradition is one of the most stable in philosophical thought and that in Silver-Age Russia, it had a striking and powerful continuation. Many major Russian philosophers of the second half of the nineteenth and the beginning of the twentieth century were genuine Neo-Platonists. Dostoevsky was no exception, with Vyacheslav Ivanov writing of his “unconscious Platonism.”

Reality was conceived by Dostoevsky, like Plato, as consisting of two worlds. In the first approximation, this was the visible, perceptible, lower reality of the natural-social continuum and the men immersed in it. He was additionally sure of the existence of a higher, supra-natural world of eternal, absolute primary forms, and also that the waves of metaphysical reality and the causal impulses birthed by them wash over all that is and penetrate into every atom. He recognized that only man is endowed with the capability of perceiving the supra-physical influences of the higher world and vesting them in words and symbols, turning them into the objects of speculation.

If the spirit and soul allow man to be conscious of his participation in the most sacred meanings of being, then faith as a function of the soul, this immortal metaphysical essence, allows us to have an unshakable conviction that the transcendent world exists and that it is more significant than the physical world.

Creative work for Dostoevsky was the means of clarifying relations with both worlds. Our writer had no use for grounded, naively realistic poetics that preferred only to touch on the empirically perceptible and obvious while ignoring the higher, ideal reality. His polemics with critics are characteristic – it was they who demanded that artists express only “reality,” and only “as it is.” But there is “no such reality,” writes Dostoevsky, “and there never was on earth, because the essence of things is unreachable to man, and he perceives nature as it is reflected in his idea, having passed through his senses; so it is that we must set the idea in motion and not fear the ideal.” (Notebooks, 21, 75)

Dostoevsky used the conception of the idea in the Aristotelian sense, as in the given case, and utilized it in its Platonic significance, a supra-physical essence living an autonomous life independent of men.

In the majority of his artistic-philosophical constructions, Dostoevsky appears as a metaphysical thinker of Platonist orientation. For him, as for Plato once, of primary significance is the higher world of immortal ideas that fertilize our gray and dim earthly reality. Coming from a mysterious world, “ideas fly through the air, but without fail according to laws; ideas live and expand according to laws too difficult for us to apprehend.” (24, 51)

Dostoevsky’s sense of the inauthenticity of men’s earthly, everyday reality at times reached the point of hallucination in his soul. And at times it began to seem to him that there would be no impediments to physical reality, endlessly distant from the higher world, suddenly dissipating in the space of a moment. This frame of mind was facilitated by scenes of city landscapes disappearing in the mists of St. Petersburg’s fog. 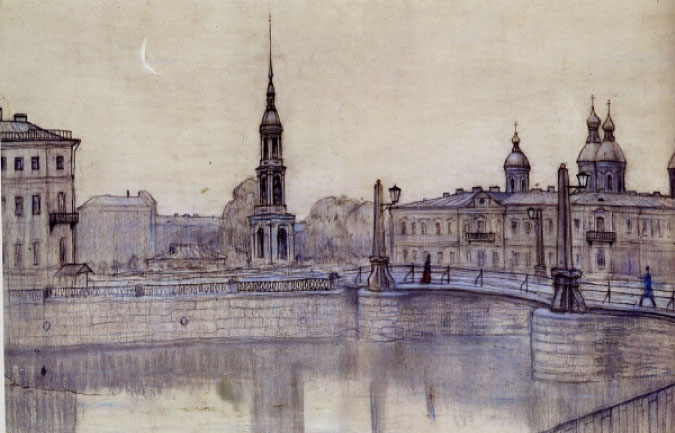 A scene of Dostoevsky’s St. Petersburg. Painting by Ilya Glazunov.

Through the protagonist of A Raw Youth, the writer voiced one of his inmost thought-dreams:

‘A hundred times amidst this fog there came to me a strange and haunting dream: If the fog scattered and departed toward the sky, might not this entire decaying, mucous-oozing city depart with it, rising with fog and disappearing like smoke, for there only to remain the prior Finnish swamp, and perhaps amongst it, for décor, the Bronze Rider on his hotly breathing, baying steed? In a word, I cannot express my impressions since this is all fantasy, ultimately poetry and, it could be, nonsense; nonetheless, I have asked myself and still ask one completely pointless question: Here men flail and thrash about, and how are we to know if all this isn’t someone’s dream and there are no genuine, no real people, and no actual deeds? Suddenly someone will wake up, someone will dream this, and suddenly everything will vanish.’ (13, 113)

The likeness between Dostoevsky’s metaphysical outlook and Plato’s metaphysics is impossible not to notice. However, there is nothing strange in this if we remember the uniqueness of the atmosphere in which Russian artists and thinkers worked in the last third of the nineteenth century. Something else impresses us, namely the surprising likeness of the two geniuses’ biographical and creative destinies.

Both Plato and Dostoevsky are individuals of colossal scale, complex and contradictory along with being extraordinarily gifted with respect to their creativity. These are two true giants of the spirit, one of whom stood at the source of European philosophical culture, and the other who was at the source of Russian metaphysics. From Plato there essentially came all ensuing Western metaphysics. In this sense A. Whitehead’s statement that one can view European philosophy of subsequent centuries as a footnote commentary on Plato is symptomatic.

In equal measure we can say that from Dostoevsky came all ensuing Russian philosophy, and it is also permissible to interpret it as a detailed commentary on Dostoevsky.

For both thinkers, the life of the human spirit served as a main theme of reflection – life in a troubled era of transition that in the terminology of Karl Jaspers represented an “axial age,” with the only difference that for Plato this was a pivotal time for world history, while for Dostoevsky it was pivotal for local Russian civilization. These two epochs were drawn together by a common characteristic – transition, when both underwent a painful isolation from old tribal roots and patriarchal traditions, when the “bond of time” came apart and considerable special spiritual efforts were required for its restoration.

For Plato the transitional nature of his age consisted also in the fact that this was the eve of future social-historical shocks. The system of city-states, having just barely succeeded in its own establishment, without notice entered into a pre-crisis condition. The Macedonian conquest was not far off, and after it the gradual decline of Greek civilization. Speeches by the Sophists and Cynics exacerbated a pre-catastrophe mindset and heralded the “beginning of the end” of an entire cultural world. 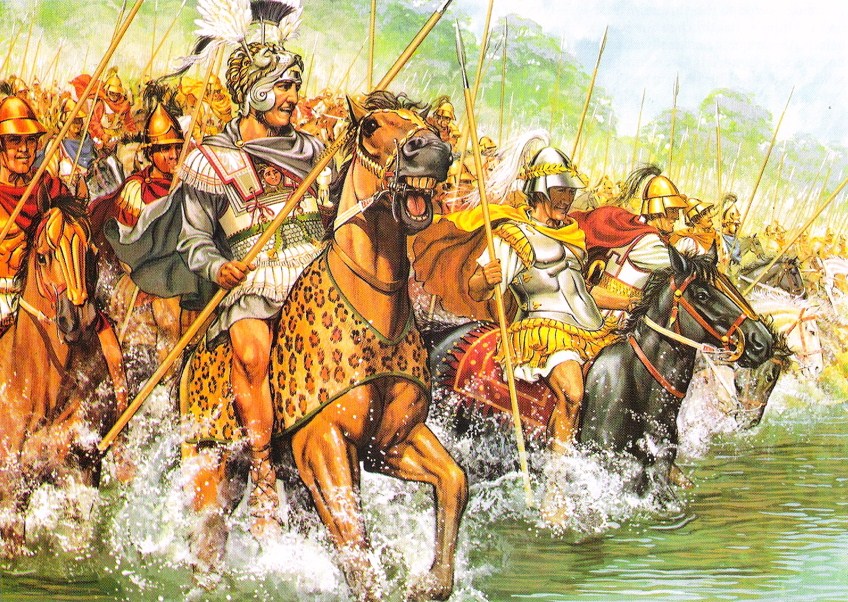 For Dostoevsky the transition of his time absorbed on the one hand the beginning decline of Petersburg culture, and on the other, the ever-more visible assertion of a new cultural paradigm that would receive the name of proto-modernity. And all this happened in a social context of clear anomie; nihilism; cynicism; total permissiveness; general moral degradation; and an unseen number of suicides and crimes.

In both of these social-historical situations similar in spirit, there advanced to center stage a new type of personality possessing a strikingly expressed will to transgression, i.e., an untamable inclination toward overcoming extant normative restrictions.

The transgressive personality, driving toward free self-definition and fearing no obstacles, having a mature sphere of motivations and tending toward independent thought, preferred to decide autonomously whether or not to reckon with existing norms, traditions, and laws. Its characteristic passionate desire for the new was revealed in a readiness for justified “overstepping” of boundaries of the tolerable and permissible, the extraordinary boldness of the creative spirit, and also in an “unusual aptitude for crime.”

The transgressive personality manifests particular keenness for cynical sophisms, various types of “corrupting ideas” in the air, ideas threatening to destroy any humanity in man.

The primary moral-legal reality established by Plato’s time, along with the sovereignty of the city states, did not take long in revealing its imperfections. Amidst a background of many dramatic social metamorphoses and collisions, the need for a more effective regulative system that could restrain the transgressive personality from dangerous steps and counter “corrupt ideas” of the sophists and cynics announced itself with special acuity. This demanded of Plato mastery of an enormous mass of moral and legal problems. And he, the direct descendant of the legislator Solon, actively led a “brainstorm” over a corpus of ethical and philosophical-legal issues in his magnificent dialogues The Republic and The Laws.

Not by accident and mostly due to similar reasons, Dostoevsky placed moral-legal and criminal dilemmas at the center of his work. He was moved by the aspiration to uncover the metaphysical and anthropological bases of man’s tendency toward destructive transgression and simultaneously delineate the means by which one could neutralize this devastating potential.

Two axial ages relating to two civilizations divided by space and time not only left their mark on the personalities of both heroes, but also allowed their gifts to develop in full measure. Plato succeeded in his realization as a thinker and metaphysician who as well possessed the singular, powerful talents of the poet, dramatist, and mythmaker. Not overshadowed by Plato in the scale of his own creative identity, Dostoevsky showed himself an artist and thinker with the original repertoire of a powerful philosophical mind and genial metaphysical intuition.